I keep seeing the following screenshot on social media at the moment, shared by various users. Probably because I have a lot of followers/friends who are writers and editors! (Warning – some of you will find this of no interest at all.) 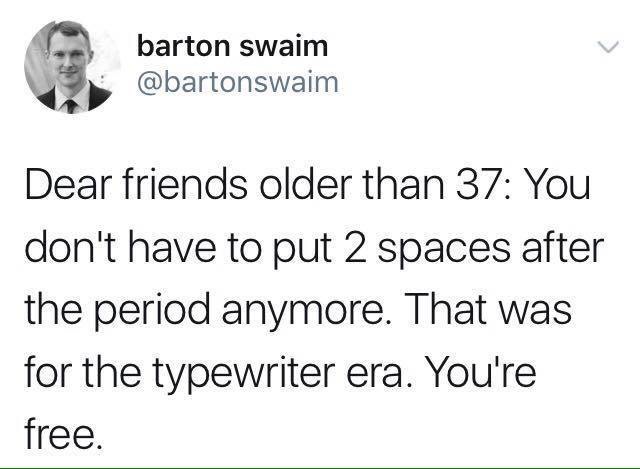 For those who have trouble seeing the image, it’s a tweet that reads: ‘Dear friends older than 37: You don’t have to put 2 spaces after the period anymore. That was for the typewriter era. You’re free.’ (My universal translator really, really wanted me to replace ‘period’ with ‘full stop’ for us Brits!)

It attracted my attention initially because, let’s just say, this may well qualify me for the title ‘the Last of the Double Spacers’ in terms of… well … my current age, which will soon shift up a digit, come to think of it.

An array of comments appeared… ‘I never double space’, ‘I love double spacing, I think it looks much nicer’ and those who had never heard of such a thing.

I was going to reflect here on why double spaces were once used and why they are no longer necessary, but Simon Whaley beat me to it with this post, which explains it all very well.

In summary, typewriter keys always took up the same amount of space regardless whether they were a ‘thin’ letter (i), what you might call medium (e, n) and then that big old letter ‘m’. If n or m (ooh, hello Agatha Christie) took up exactly the same amount of space, the ‘space between’ letters in the typed sentence would vary on the paper. So by adding an extra space at the end of a sentence – two taps of the typewriter space bar instead of one – it made everything that bit clearer.

(Simon’s explanation is much better. I’m sitting in the garden feeling bank-holidayish which makes me rather rambly. And yes, the bank holiday is officially over, but our day off is Monday, so Tuesday is ‘day-off-in-lieu’ this week!)

Does it matter? Well, I still double space automatically most of the time.

I’m more likely to do it when I’m in full flow, the words surging out of my finger tips, auto pilot on at full blast.

However, I’m also an editor. I have to go through lots of magazine articles taking out the double spaces. Editors have to do it. I know that. Double spaces need removing before going to design.

This has made me hyper aware of the issue; I have become quite adept at spotting a double space. As Simon also suggests, I go through at the end, or sometimes at intervals, replacing double spaces with single spaces all at once using the ‘find and replace’ function. (A good procrastinating device when I can’t think what the next paragraph should be.)

If I’m writing for publication, I try and always do this, because I know it will need doing anyway by some editor or copy editor or proofreader down the line.

Does it matter otherwise? Up to you, I suppose. But if I double space in a blog post it can mean that there appears to be an extra space at the beginning of a line if it happens to hit the line break, I’ve noticed. So I can still end up going through a blog post removing them, although that’s more of a faff, so I don’t always bother unless it really upsets the formatting.

[Update: interestingly it looks like WordPress might have dealt with this for me; I know there are a few double spaces here, but they are not noticeable in the published version. This might be due to the font. What do you think?]

This post is surprisingly hard to finish. I need a strong conclusion, a punchline. But I’m still too bank holidayish.

But my cafetière is empty.

Lucy is a mixed media artist with a particular interest in acrylics and feltmaking. She is also an experienced writer and editor.

View all of Lucy Hannah's posts.

This site uses Akismet to reduce spam. Learn how your comment data is processed.

Lucy is a mixed media artist with a particular interest in acrylics and feltmaking. She loves colour, texture and believes that nothing is wasted. She is also an experienced writer and editor.

If you subscribe to posts via email, you consent for your email to be used to send you these posts. Your email will not be used in any other way, nor handed to any third parties. An option to unsubscribe will appear at the bottom of all emails. Click here to view full privacy policy.